Protecting our Waters is Not a Distraction

While we’ve all been preoccupied with the national elections and the latest Fake vs. Real Media controversy, enjoying watching President-elect Trump call the top producers and journalists from the leading “mainstream media” outlets on the carpet of his golden tower… a more important turning point in our humanity is reaching its crescendo.

Far out West, in North Dakota, a 9-month standoff between Oil & Water has received only the most superficial news coverage from both the mainstream media or alternative press. Yet this is bigger than the Bundy / BLN standoff and repeats the same abuses of Eminent Domain. And as the tinder fires in our North Georgia mountains and the 5 (FIVE!) Colonial Pipeline leaks in this year alone show, this is a more clear and present danger to our environment than Climate Change.  And with heavily-armed mercenaries (security guards paid for by the pipeline) and law enforcement officials wantonly shooting unarmed people who are exercising their 1st Amendment Rights, and spraying them with freezing water cannons and concussion grenades, this is a bigger miscarriage of justice than we saw at Ferguson.

Right now, in the United States at the Sacred Stone Camp of the Standing Rock Sioux Tribe Reservation in North Dakota.  Unarmed citizens – our friends and neighbors – are being attacked, beaten and injured for protecting our most precious resource — clean, fresh water!

And our government backed down.  Despite all the “mainstream media” calls for WAR! – we succeeded in making our call for peace heard.

This is OUR country!  Our Water!  Our People!

When you see the whole North Georgia Mountain ridge burning – on fire – and the whole Southeast consumed by drought again, how can you be anything except FOR WATER ?  We’ve watched California, Oklahoma, Texas become deserts in the past 5 years, right after a 5 year drought here in the East! Knowing we are all made up of >70% water… that our children, our pets, our loved ones, our land depends on it.  Won’t you join me and stand with Standing Rock?  Won’t you be FOR WATER ?

The Sunday before American Thanksgiving, a tragic onslaught against American citizens occurred injuring 167 people who were trying to protect our great country from polluting the main source of water that feeds the entire central heartland.  Mercenaries employed by Energy Transfer Partners and militarized law enforcement officials turned freezing blasts from their water cannons in 27-degrees temperatures onto innocent civilians who are protecting our water and indigenous sacred tribal lands in North Dakota. 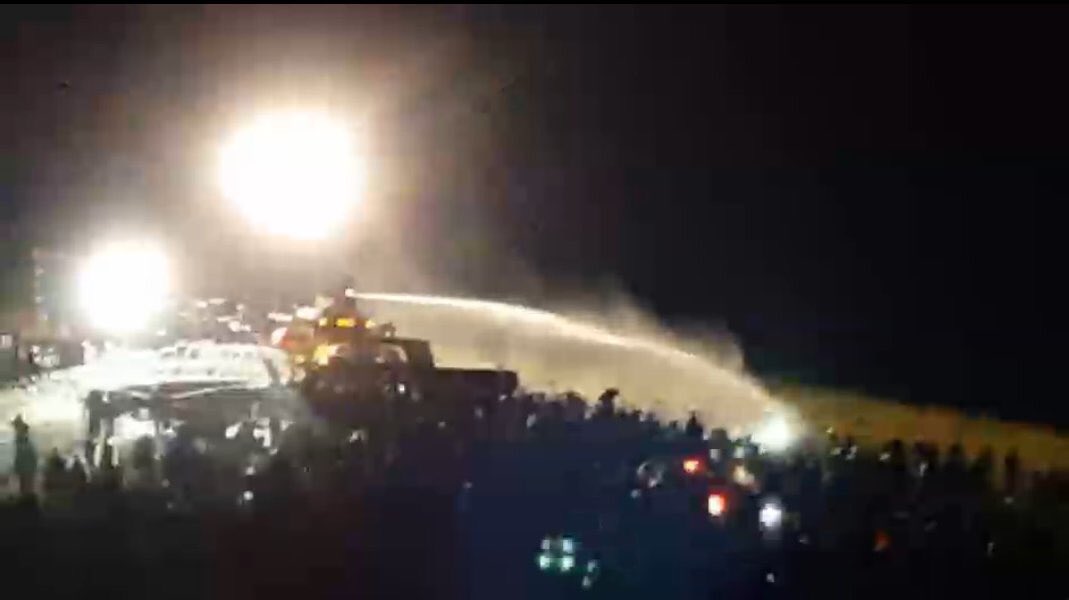 A 13-year old girl was shot in the face.  Another may lose her arm due to the concussion grenades that the officials employed.  Men were shot point blank in the belly and knee-caps.  Two elderly tribe members went into shock and cardiac arrest during the attack.

And this is merely the latest offense in a series of attacks and violations that the ETP paid troops have inflicted upon our our people, the Water Protectors, since April 2016 … going on for over 9 months now!

Energy Transfer Partners, a major Oil Corporation, capitalized by most of the big banks (and our politicians and media) kindly shows the problem directly on their website as they proudly display the route for the pipeline that they insist must be built at all costs.  (According to available background reports, ETP bribed and colluded with government officials at Local, State and Federal Jurisdictions to get the multiple permits needed to construct this disaster and are insisting on continuing their efforts despite multiple injunctions and live court actions currently being conducted against them.) [Consolidated Sources]

Who are the Water Protectors?

Since April this year, many of the Sioux tribes actively took a stand to prevent the pipeline from being built.  Over the next 6 months, over 300 federally recognized Native American nations came in solidarity to join them along with other concerned citizens across the nation.

Canadian Native and Inuit Nations joined.  Even aborigine nations from as far as New Zealand and Australia have made the trek to stand at Standing Rock!

Look around you. Our Mother Earth is very ill from these violations, and we are on the brink of destroying the possibility of a healthy and nurturing survival for generations to come, our children’s children.

Our ancestors have been trying to protect our Sacred Site called the Sacred Black Hills in South Dakota, “Heart of Everything That Is,” from continued violations. Our ancestors never saw a satellite view of this site, but now that those pictures are available, we see that it is in the shape of a heart and, when fast-forwarded, it looks like a heart pumping.

The Diné have been protecting Big Mountain, calling it the liver of the earth, and we are suffering and going to suffer more from the extraction of the coal there and the poisoning processes used in doing so.

The Aborigines have warned of the contaminating effects of global warming on the Coral Reefs, which they see as Mother Earth’s blood purifier. …As these destructive developments continue all over the world, we will witness many more extinct animal, plant, and human nations, because of mankind’s misuse of power and their lack of understanding of the “balance of life.”

Our Ancestors foretold that water would someday be for sale. Back then this was hard to believe, since the water was so plentiful, so pure, and so full of energy, nutrition and spirit. Today we have to buy pure water, and even then the nutritional minerals have been taken out; it’s just empty liquid. Someday water will be like gold, too expensive to afford. …Not everyone will have the right to drink safe water. [Chief Avrol Looking Hourse 8-26-16]

As people come from all across the world to stand with Standing Rock, ETP and their mercenaries get more and more desperate and, hence, they are getting more and more violent.  The time for passive witnessing is over.  We cannot standby silently and watch our brothers and sisters suffer alone.  This is the time for a huge coming together of a people of all races and all beliefs gathering in support of one thing that we all are, need, and love – Water is Unity

“All human beings are interconnected, and each therefore deserves their own autonomy while, at the same time, each has a duty to serve all others”

The 4 Feathers – Healing Time on Earth!

It is time for us to hear the call of this duty.  Time for the 4 feathers – White, Red, Black, and Yellow – to come together and unite FOR WATER.  For the Children of the Rainbow prophecy…

“When the earth is ravaged and the animals are dying, a new tribe of people shall come unto the earth from many colors, classes, creeds and who by their actions and deeds shall make the earth green again. They will be known as the warriors of the rainbow.”

“There will come a day when people of all races, colors, and creeds will put aside their differences. They will come together in love, joining hands in unification, to heal the Earth and all Her children. They will move over the Earth like a great Whirling Rainbow, bringing peace, understanding and healing everywhere they go. Many creatures thought to be extinct or mythical will resurface at this time; the great trees that perished will return almost overnight. All living things will flourish, drawing sustenance from the breast of our Mother, the Earth. [The Rainbow Prophecy]

This is not anti-anything.  It’s not against the pipeline… against progress.  It’s FOR WATER!

Instead of protecting the water, let’s use it!!  Direct it.  This completely stops the fighting against anything, there is an already powerful number of people sitting on the very ground together, harness the power of the water, together, in love and with purpose and change the flow of direction.  This would also create a brand new look at hydropower instead of oil as well. [Lisa Gawlas 11/23/2016]

We are at the very crux of such a powerful healing moment for Earth and for all our Nations.  And we are so, so, SO ready for it!  I stand with #StandingRock and unify with everyone for Water!  In the words of John Denver…

Let the mountains talk, let the river run
There’s a wisdom here, there is much to learn
There’s much to know, much to understand
In this healing time all across the land