The Media Enters the Shift of Ages… Finally!

With all the surprises, bumps and turns we’ve experienced in 2016 it is still astonishing that this year would bring about the collapse of Controlled Media and the centralized propaganda machine that has increasingly dominated the world since 9/11.

I have struggled mightily analyzing and reconciling the furor this past week over Fake vs. Real News which reached it’s fevered pitch Sunday morning in Ron Paul’s explosive tweet naming the actual newscasters at CNN, ABC, USA Today and elsewhere who 1) conspired with the DNC to get Hillary Clinton elected as evidenced in John Podesta’s emails and 2) put aside the tenets of professional journalism back in 2003 (13 years ago) by failing to investigate the truth and sources accusing Iraq of stockpiling weapons of mass destruction.

…be warned, this is a long post written not by a professional newscaster.  Proceed at your own leisure (risk) ! ….

My challenge was emotional.  I reacted with outrage and our “victim” program that these all powerful beings were threatening the 1st Amendment: The right to free speech and expression!

Then I felt sick.  The hypocrisy, trying to shift onto another responsibilities and consequences which were rightly theirs (Hillary, the DNC, Obama, the media).

Then helplessness.  Why?  Can’t these people see how divisive they’re being?

But as I researched and wrote and got endlessly frustrated with mainstream media webpages crashing, with their infernal auto-play video ads and allow cookie requests… I began to feel curious.

Why is this particular theme or meme so important? To get there, we have to look at both the electoral landscape and how corporations deal with rank disasters (i.e. the “blame game”)
Leading up to t

he 2016 Presidential elections in the United States, Hillary Clinton’s campaign and the Western mass media spent most of their time accusing widespread groups of people of sabotaging their efforts.  This escalated after she lost the election.  Everyone, (other than Hillary herself, her family and supporters, the Democratic Party and the mainstream media TV stations and  newspapers) it seems, was responsible for the loss.  Just a few examples….

Justifying a Massive Loss on Investment:

How do you explain wasting $566 Million? (the cost of the Clinton for president campaign).

It’s not easy.  Doable – I worked at AT&T for 5 years (the T-mobile merger comes to mind…) – but not easy. Had the campaign been a new product launch that flopped in some major corporation we wouldn’t hear much about this in the media.  But the same finger-pointing and targeting of innocents would undoubtedly occur.  So everyone involved now scrambles to explain to their investors (and the puppet masters behind the scenes?) why the defeat occurred…  and, of course, why it wasn’t their fault.

Obama –> Russia; Hillary –> Obama, F.B.I., Facebook, and her list goes on.  I think I’ve heard mainstream media even include Colin Powell and Oprah in the list of culprits that Clinton’s blamed.  DNC – ?  Well everyone! (but not them… in fact with all the resignations lately, can anyone even tell who sets policy & PR direction for the DNC now?

And when we get to the Mass Media, (the 5 global corporations who dictate all the news broadcast on all local TV stations and all local newspapers), well of course who else would be their excuse…

Who can they blame for Clinton’s defeat after they all universally nominated her and published poll after poll indicating she would crush Trump in the elections?  How did they get it so wrong?

Voters got misled by fake news published on Facebook, Twitter, Google and other social media.  That’s our excuse! And along comes an onslaught of reports about Melissa Zimdars, an assistant professor of communication at Merrimack College, who published a list on Google categorizing supposedly “False, misleading, clickbait-y and satirical ‘news’ sources.”

They are the ones who relentlessly pushed to find any evidence of Weapons of Mass Destruction in Iraq (and forced Western leaders to admit there was none).

They actual read, listened through and analyzed political platforms as they were presented, new laws, official edicts, and the leaks – from Snowden, Wikileaks, Manning, and on and on.  They kept an open mind and listened to all the information, refusing to accept simple propaganda.

These are sites that have stood up to corporations poisoning our food, our water and our air.  They have inspired other individuals to collapse the king of GMOs (Monsanto) and get McDonalds to stop putting “pink slime” in their hamburgers.

They show fewer ads than CNN, the Huffington Post, and MSNBC.  Have fewer pop-ups, annoying auto-play videos, and actually cite their sources for the most part.  So how Zimdars arrived at her compilation is most puzzling.  It is, however, amusing that she missed 10 or 100 similar outlets for each 1 sherecorded … the ALT press is a LOT bigger, you know?

Did it work?  Did Mass Media successfully justify their failures surrounding the recent election and keep their jobs?  Well, initially it looked like Google, Facebook, Twitter, etc. were going to fold and ratchet up their censorship of controversial information — and they still may — but I don’t think the media expected the reaction they received from both sides of the aisle across all ages and backgrounds.

The general theme throughout each response lays the responsibility for Clinton’s loss on Hillary, her campaign, and the DNC, not on any fake news site or fake news story. A member of the Bernie Believers group said that Clinton originally had his vote, but after “seeing what she was willing to do to win,” he chose to give his vote to another candidate. [see more @ inquisitr.com] <–not on Zimdars’ list by the way

By making these public accusations and wallowing in their own hypocrisy, Clinton, the DNC and ABC-CNN-NBC-CBS-NYT-WSJ-USA Today, etc. invited others to join the conversation and add their own analysis.

And in so doing, they hastened the revolution against central powers of control — the move to decentralize — be it the *Party* or the *Media Conglomerates.*  The American people are calling this hypocrisy for what it is:

Her war record, her corporate donors, her ‘public positions and private positions,’ her ‘dreams of free trade,’ her ‘willingness to compromise on Roe v Wade,’ her foreign policy record (Honduras, Haiti, Libya, Syria, Iran, Iraq, Saudi Arabia, Israel/Palestine), her ties to fossil fuel industrial complex and the military industrial complex, her disdain for everyday Americans, her telling environmentalists to ‘get a life’ while bragging about promoting fracking in developing countries, her calling young people of color ‘superpredators,’ who need to be ‘brought to heal.”  And the rigged primary. Than you gods she lost, maybe we’ll get an unrigged primary in the next cycle.”

Individual Americans are apologizing to Russia for the unjustified accusations made by Obama’s government. No, Hillary, 17 U.S. Intelligence Agencies Did Not Say Russia Hacked Dem E-mails

Individual Americans are cheering the Alternative information outlets and the rank & file in the FBI who intransigently keep seeking and revealing the truth.

Individual Americans (and Canadians and others globally!) are issuing major blow-back to Zimdar’s list.  One of the most cited is a tweet from Ron Paul (@RonPaul), revealing the Real Fake News List 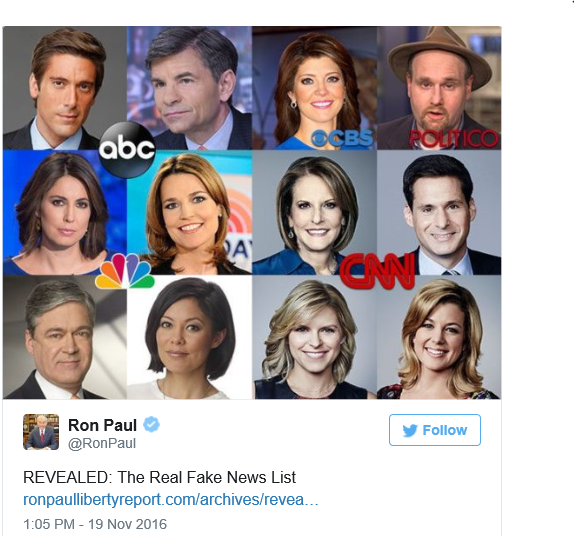 This list compiled by Chris Rossini on Ron Paul Liberty Report named the journalists who told us Iraq had weapons of mass destruction without first verifying their sources.

There was absolutely no evidence that Saddam possessed WMDs. The story was complete and utter BS. Yet this fake news dominated the headlines for months in 2002/3 and led to an illegal invasion in which many people lost their lives. Unlike today’s manufactured ‘fake news’ hysteria the Iraq war was no joke. An entire country was destroyed.

And guess what? Those who pushed the ‘Iraq has WMDs line’ are now coming on television to express their concern over ‘fake news’! [Source read more]

Rossini named the people who we all saw, reading Podesta’s emails as they were published on Wikileaks, outright colluded with the Clinton campaign to rig the Primaries, cheat at the debates, and accept bribes to hide or fabricate a certain story…

It is tragic to see supposed “role models” refuse to face charges of corruption, unethical activities, dirty tricks and policy failures.  If anything, the legacy that the Clinton campaign leaves is the glaring need to reset their values and restore truth, justice and the American way!

And don’t get too concerned about these flailing accusations really causing more censorship in the USA.  What they show instead is how irate Americans get when their favorite news venues — that’s right  Alternative not Mainstream Media — get badmouthed and threatened.

2016 is clearly the year when any American can now say

“I read Conscious Life News … or The Activist Post … or I watch Russia Today …or read Drudge and Zerohedge, etc…”

And no longer feel uncomfortable about that fact!

So thank you Melissa Zimdars and your champions in the mainstream media from The Atlanta to the Huffington Post.  Spurred along by Trump’s win you finally legitimized independent Alternative Media for everyone.  Their ratings should now reach all time highs and continue to grow! 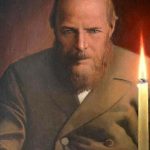